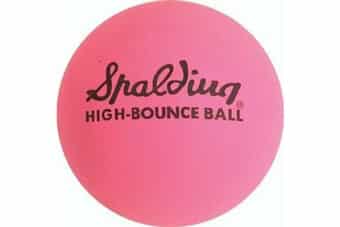 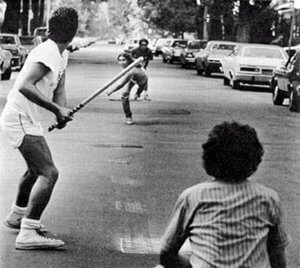 I grew up in Brooklyn New York in the 1950's in an era before television, cell phones, and electronic games existed.

I remember how excited I would be when I had 10 cents  because then I could go to the candy store on the corner to buy a brand new Pink Spalding ball. The balls were on a shelf  behind a sliding glass door, so I had to wait for Ida, the candy store owner, to take out a ball for me to try. She would hand me the ball and I would bounce it several times. If I thought it bounced high, I would buy it. But if it was not a "good bouncer" I would ask to try another ball, until I found the best one. Ida was a wonderful,  patient woman, who put in very long hours at her store. She even had a cot in the back so that she could take a nap.

I played many different games with my pink Spalding ball. I played "stoop ball" by throwing the ball against the stoop (steps) in front of my house. If the ball hit the corner point of the steps you got 500 points. My friends and I played "punch ball" in the school yard with our pink Spalding balls. Punch ball was like baseball, but we punched the ball instead of hitting it with a bat. The batter would throw the ball up and punch it with her fist.  In another game with the ball, one of my favorites, I would  bounce the ball while telling stories. The story would always be different, but it usually started with something like, "A my name is Alice and I like apples. B my name is Barbara and I like boats . . . Get the idea?

Almost all the games we played were outside. Another favorite activity was Roller Skating. These are my roller skates from the 1950's. To see how they work, please watch this video:

We usually skated in the street (where the cars were) because that's where it was the smoothest. We had to be careful not to let our parents see us skating, because if they did they would make us skate on the sidewalk - which was no fun because it was bumpy! Sometimes we would all go up to the schoolyard and skate there for hours and hours.

In Brooklyn in the 1950's, every girl had a jump rope. The jump rope was usually made from the rope that our mothers used to hang out the clothes to dry. We would either jump rope alone or with our friends. The really good jumpers could do "double dutch" which involved jumping between two ropes.

The boys' favorite activity was stickball. In many ways, stickball was like baseball, but it was played in the street. The "stick" was an old broomstick with the handle and whiskers cut off to make a long bat. In Brooklyn,  stickball was called "sewer to sewer" because home plate was at one sewer in the gutter, and the next sewer was second base. I remember so well, the doorbell ringing on Montgomery Street. I would answer it and a bunch of boys would ask if my brother Bert could come out to play "sewer to sewer." He would grab his broomstick and out he went. Sometimes I would stand on the porch with my jump rope and watch them.

The boys also liked to play with yo-yos.  Every spring, the ‘Duncan yo-yo man’ would come to our candy store. He would show us all kinds of yo-yo tricks, enticing us to get money and buy one. A lot of the boys bought them and learned to do tricks like "Around the World" and ‘Walking the Baby.’

I treasure all of these wonderful memories of growing up in Brooklyn in the 1950's. I still smile when I think about my pink Spalding ball, my jump rope, my jacks, and my roller skates. They made me so happy.