You are here: Home / Heritage / My Mother’s Family

They were  both born in Russia, which is where they met, became engaged and married.  They had their first child, Bess, in Russia, before they emigrated to the United States. When they came to this country by steamship, around 1900, they were able to bring only two of their possessions: a set of  large feather pillows and a set of handmade copper pots. These steamship trips were long and difficult. Their passage, with baby Bess, was far below the main deck. It was very crowded and there was little fresh air. The crossing took about 3 weeks. Because of the poor health conditions, crowding, and lack of fresh air, it  was not unusual for people to die during the passage.

They settled in the East New York section of Brooklyn, on Riverdale Avenue (#969) in a small apartment house. My grandmother managed the apartment building while my grandfather helped with the chores. Some of the chores included keeping the coal stove in the basement going, and painting the tenants’ apartments. It was my grandmother who was responsible for all the details involved with keeping the building clean and in good repair. My grandmother, whom I called My Bubby, was quite an impressive woman. In addition to running the apartment building and taking care of seven children, she also helped establish the Women’s Lubavitcher Movement in the United States. To this day, there is a plaque on Ocean Avenue in Brooklyn, dedicated to Dora Greenberg and her work in helping to start the Lubavitcher Women’s Movement in this country.

In the early 1900's in Brooklyn, women were expected to do all the household chores. And so, my grandmother did all the cleaning, food shopping, baking, cooking, knitting, and sewing. She made ALL the children’s clothing! The children, starting with the oldest, were:  Bess, Izzy, Helen, Selma (my mother), Ida, Lee, and Joe.  Every Thursday, I remember watching my Bubby put all the children’s Sabbath clothes into a huge pot on the stove. She would then boil them to clean them, and hang them out to dry. On Friday morning she would iron them so that all the children would look pristine when it was time to  welcome the Sabbath on Friday at sundown.

My grandfather, whom I called My Zayde, did not really have a job.  He never learned English in all the years he lived in America. He only spoke Yiddish.  He spent his days sitting at the table with a book and a glass of hot water with a lemon in it.  He would drink the hot water and study the Torah. My Zayde had a long white beard, which always had crumbs in it!

Although my grandmother was a very charitable woman, she was inflexible about her religion. She demanded that all of her children follow the Orthodox Jewish religion (much like Tevye in Fiddler on the Roof). When one of them chose not to, it  caused a lot of problems. For instance, her first born, Aunt Bess, wasn’t allowed to go to college. Bess loved books and passionately wanted to go to college. However, my grandmother forbade her to go, because the Orthodox Jews did not send their girls to college. 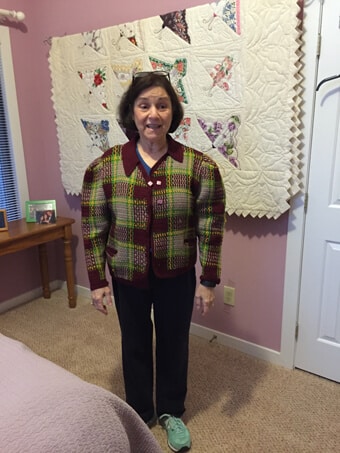 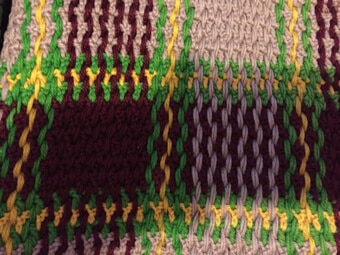 I still have this sweater that my Bubby knit from wool she dyed and spun herself! 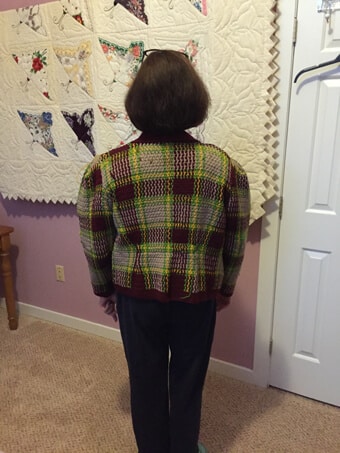